Guangdong Zhicheng Intellectual Property Rights Research Institute In 2008, Erdal Arikan (a Turkish professor in the Electrical and Electronics Engineering Department at Bilkent University and an ICT expert) first proposed polar codes and published his paper on the codes later.

In 2018, the world’s first 3GPPcompliant, polar code supported 5G system was officially launched. After a decade of nonstop efforts and inputs, the theory of polar codes was finally translated into practical application.

As we all know, the 3rd Generation Partnership Project (3GPP) officially froze the standalone (SA) specifications for 5G New Radio on June 14, 2018. This marked the formal release of 5G Release 15 standards. The non-standalone (NSA) NR specifications were released in December last year. At present, the first phase of standardization work for all features has been completed. Polar codes were confirmed last December as a basic element of 5G standards.

The world’s first 3GPP-compliant, polar code supported 5G system was officially launched at the Mobile World Congress on February 22, 2018, about 10 years after the release of Professor Arikan’s paper on polar codes.

What we see today is just the tip of the iceberg. Below the waterline, there are decades of nonstop research and exploration.

In 1948, Claude Shannon issued a paper named A Mathematical Theory of Communication, which became the foundation of information theory. In the paper, he pointed out the maximum rate at which information can be reliably transmitted over a given bandwidth with certain quality. This is known as “Shannon’s limit”. He also proposed that the channel coding technology provides the means to reach the limit. As a result, the channel coding technology has become the crown jewel of the communications sector, and numerous scientists have worked tirelessly to develop and evolve this technology.

In 1967, the Viterbi decoding algorithm was invented. It represented the pinnacle of the first generation of the channel coding technology. This algorithm made decoding simpler, and provided a better performance in the decoding process. It enabled the widespread use of convolutional codes in the information and communications industries. This algorithm was adopted for 2G GSM networks in 1988, and for subsequent 3G networks.

French professor, Claude Berrou, discovered the turbo codes in 1991, which was the first coding scheme to bring the industry close to the Shannon’s limit. This opened the door to the 2nd generation of the channel coding technology. In 1999, turbo codes were adopted by the 3GPP as the channel code for 3G UMTS systems. They have also been used in 4G LTE systems. Building on the turbo code principles, the computer science community gained a new understanding of the LDPC codes which had been discovered by Professor Robert Gallager in 1962. Based on this new understanding, people realized that, with modern computing power, LDPC codes could also bring us close to the Shannon’s limit. In the decades that followed, LDPC codes have been widely adopted in storage and broadcasting domains.

In 2008, Professor Arikan published his paper on polar codes. Polar codes became the only theoretically-proven coding scheme that could reach the Shannon’s limit. They ushered in the 3rd generation of the channel coding technology. Both LDPC and polar codes have since been adopted as 5G standards.

During the discussion on 5G schemes in the 3GPP RAN1#87 Meeting held in late 2016, the polar code scheme outperformed the LDPC and Turbo 2.0 schemes, and became the final control channel coding scheme for 5G applications in eMBB. Since then, polar codes had formally become part of the 5G basic communications frame agreement.

Moving from theory to practical application, as is evident from the above-mentioned events, is a process rife with countless engineering hurdles. It took 10 to 20 years for each of the three generations of the channel coding technology to evolve from academic discovery to industry standards.

Polar codes which reach the Shannon’s limit, are with low complexities of coding and decoding algorithms. They offered a solution to the problem facing Shannon’s information theory for nearly 60 years.

The crux of constructing polar codes lies in channel polarization. As for coding, the coding method is adopted to let sub-channels present their own reliability performance. When the code length continues to increase, some sub-channels will approach the reliable channels whose capacity is close to 1 (error-free code), and some will approach the pure-noise channel with capacity close to 0. Information should be directly transmitted through the sub-channels with capacity close to 1, so as to maximize the channel capacity. Regarding decoding, a simple successive interference cancellation (SIC) decoding method can be used for polarized channels, to achieve near maximum likelihood (ML) decoding performance with low implementation complexity.

In static and mobile test scenarios, polar codes are used to achieve stable performance gains in both short- and long-packet scenarios. The spectral efficiency of existing cellular networks is increased by 10% and the speed is up to 27 Gbps with the combination of millimeter wave. The experimental results show that polar codes can simultaneously satisfy the International Telecommunications Union’s (ITU’s) three application requirements for Mobile Internet and IoT, namely ultra-high speed, low latency, and massive connectivity.

With the first version of 5G standards R15 being frozen and sealed, communications equipment suppliers, chip manufacturers, Telecom carriers, and researchers concerned all actively announce and declare their 5G standard patents to the European Telecommunications Standards Institute (ETSI, a non-profit standardization organization in the telecommunications industry and a member of 3GPP, has 457 members from 47 countries, including telecommunications administrations, national standardization organizations, network carriers, equipment manufacturers, dedicated network service providers, and user research bodies). For details, see the Thematic Research on 5G Standards: Who is the Leader of 5G Standard Patents? But, what about their research performance and patent layout in terms of polar codes? To answer this question, the authors of this article collected and analyzed the statistics of 5G polar patents that companies have declared to the ESTI. 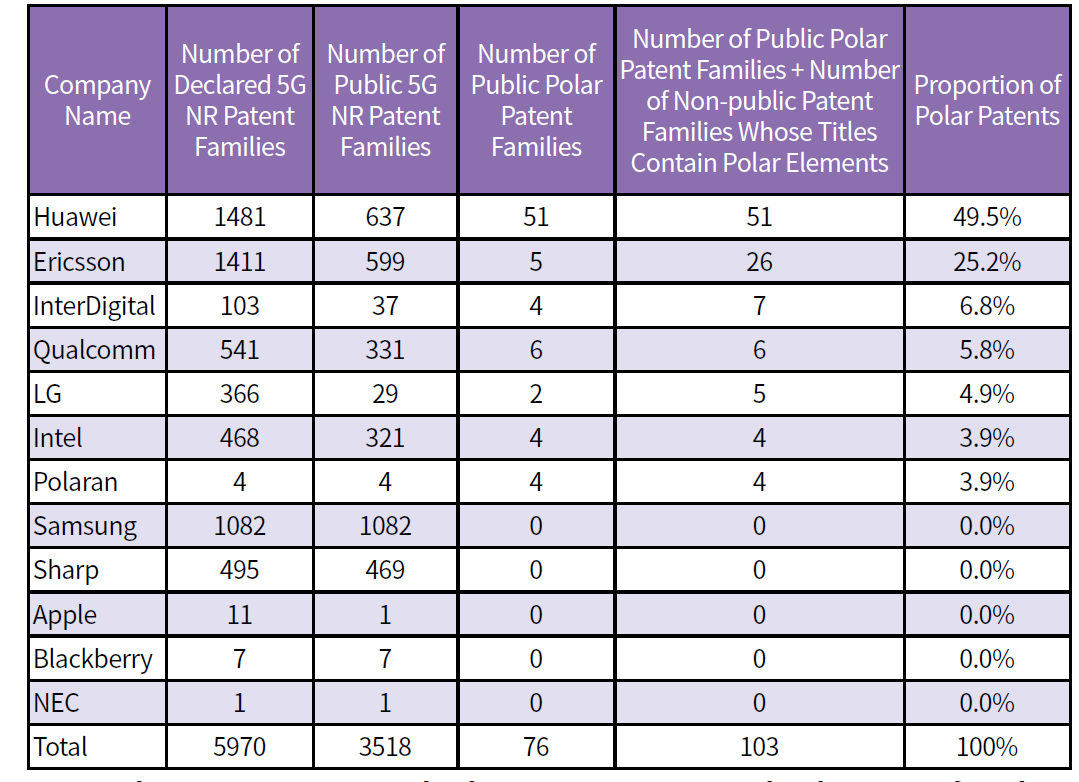 Looking forward, we clearly know that the establishment of the standards ushers us in a 5G communications era. 5G technologies including polar codes will surely create value for the society in a faster and better manner, and bring more miracles to the ICT industry and human society at present and in the future.