Minister-Counsellor at the EU Delegation in Beijing

The reader of this magazine is probably familiar with the European Union Intellectual Property Office (EUIPO) in the sense to know that it is the Management Agency of the European Union for the European Union Trade Mark (EUTM) system and the Community Design (CD) system. Its seat is in Alicante/Spain. The equivalent institution in China after the recent reform is the SIPO. For invention patents the so-called Unitary Patent Treaty is still not yet in force but in any case it will not be managed by EUIPO but by the European Patent Office in Munich/Germany.

This is however only part of the commitments of EUIPO. The present article has the aim to provide a better background on the EUIPO, its competencies, its situation within the European Union organisations, some figures and statistics. By having read this article, you should be quite informed about what you can expect from EUIPO as services and in which context these are rendered.

Although intellectual property has a history of more than 100 years in Europe, EUIPO is rather young. It was created as an independent, selffinancing and decentralised agency with the aim to comply with its technical mandate to manage the newly created Community Trade Mark system.

The Community Trade Mark System is part of the single market strategy of the EU providing a single registration for the whole European Union. It coexists with the national systems meaning that a trademark or design patent applicant has the choice to seek protection for its Intellectual Property Right (IPR) for the entire EU through EUIPO, for one or more Member States through the national systems or through both of them. In fact, some companies opt for both protection systems in order to be sure to be protected in a core market, if, for example, one or the other right is invalidated over time.

So, since 1996, the now so-called EUTM system is in place and these are the numbers for trademark applications: 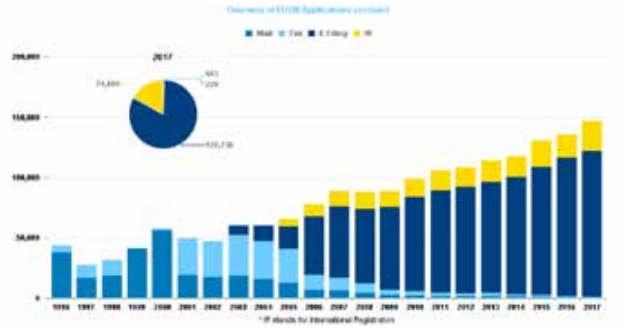 The numbers show a continuous growth of trademark applications meaning that the creation of the EUIPO was felt as a necessary instrument for the European business. In fact, at the start, April 1996, it was believed to receive some 15,000 trademark applications and it turned out that three times more were received by the end of that year.

Chinese businesses are increasingly applying for EUTM's as shown by the following numbers for the Chinese universe until January 2018:

Until now the EUIPO has received a total of 62,999 applications, some 3% of its total, from the Chinese universe. The real number may be higher as Chinese industries are also invested outside China meaning that even more applications with Chinese interests may have been received, although counting for other countries.

As from the moment to receive fees from the applicants (1996), the Office was self-financed. It created afterwards a structural surplus permitting the Office to lower the fees over time and to take responsibility for further functions, entrusted from the EU institutions to EUIPO.

EUIPO understands itself as a modern, user-driven organisation which efficiently helps its users to get quick protection for trademarks and designs. Some actual facts and figures may give the reader a rough picture where EUIPO stands today:

Manpower (internal and external): some 1500 persons

99% of trademark applications received through internet, internal electronic workflow of files Development of electronic tools for the benefit of the users

The numbers of the trademarks received is far from comparable with what the CTMO has to deal with. It received in 2017 more than 5 mill.trademarks, a number far higher than what EUIPO has received over its whole existence. Being conscious of this challenge and understanding that a smooth functioning of a Chinese trademark system benefits certainly not only the Chinese industry but also foreign industry, the European Union's Commission and EUIPO very early started to take contact with Chinese authorities with the aim to improve the Chinese IP systems. A lot of mutual contacts have been established and deepened over time. Common activities have been carried out in the interest of the users and will be continued in the future. The new SIPO continues to be and SAIC has been in the past strategic partners of EUIPO in its international co-operation.

Long time ago, EUIPO understood that the best scenario for the globally or transnationally operating businesses would be, if there would exist, for the whole planet, only one and only registration system. Since this is not possible from the current perspective, EUIPO deploys efforts to enhance IP protection in different parts of the world, including China, through co-operation with the aim to approach legislation and practices. Annual working plans between EUIPO and SIPO and the previous SAIC have been concluded with the aim to enhance mutual understanding and to identify best practices and provide training, but also Memorandums of understanding with a total of 62 IP offices around the world with the same aim.

Some initiatives EUIPO started by the beginning of the century have become in the meantime a standard in Europe and have benefited users from countries all over the world. Whereas practices of trademark examination differed in the different IP offices all over Europe, harmonization exercises have been carried out to approach the practices of the EU Member States offices, for example in the assessment criteria of the distinctive and dominant elements in trademarks.

One issue the IP users, like business and legal representatives with whom EUIPO is in constant dialogue, have asked for is to get access in one site to the trademarks and designs registered in the Member States and in the world. The users need in fact to know, in order to establish their IP strategy, what IPRs are already occupied by and whether a certain trademark chosen may encounter difficulties in the registration process in a country of interest.

These users had to go to the 25 websites of the different Member States and to the regional office of Benelux in order to assess the chances for success of a chosen trademark or design. The two IT tools now in place, TMView for trademarks and DesignView for design patents, are now available for free to the users and constitute a simple way to get free access to nearly 46 mill. trademarks and some 13 mill. designs globally. China's designs are already incorporated in the DesignView tool and steps are taken towards the association of the Chinese trademark database with TMView in the course of 2018. This step will make life easier for Chinese practitioners.

EUIPO is also part of the so called TM (Trade Mark) 5 and ID (Industrial Design) 5, groups composed of the five major IP offices around the world, EUIPO and the ones from China, US, Japan and South Korea. Different projects are carried out by these offices with the aim of harmonising practices among them and ease the proceedings for the users. The business and legal representative associations are invited to its annual meetings and are given the possibility to express their main concerns.

EUIPO is par t of the European family of institutions and agencies, created over time in order to carry out the competencies the Member States have delegated to the European Union. It has originally been created by the institutions (European Commission, Council and Parliament) in order to manage the European trademark system first (1994) and the Community design system afterwards (2006). So, in the beginning it was a rather technical task to set up the protection system for trademarks and designs. The European Union joined in 2004 the Madrid Protocol allowing users to fi le applications through the Madrid system designating, among others, the European Union as a whole (China is a member since 1995). Over time, EUIPO has been entrusted by the European Commission with further tasks in the area of IP. It has taken over the Observatory on Infringements of Intellectual Property Rights (2012) which, among others, develops tools and promotes best practice to enhance protection of this critical asset for companies and individuals and provides facts and elements which allows the European institutions to adopt a more adequate policy in terms of intellectual property. In 2016 the EUTM underwent a major reform in order to streamline its proceedings and adapt the EUTMR to its legal practice. Its competencies have been widened. The core tasks also comprise international cooperation with IP Offices around the world. Additionally, the second 4 years program “IP Key China”, co-funded by the EU, EUIPO and MOFCOM and implemented by EUIPO with a series of activities on IP in China and in Europe, just started in September 2017. Similar IP Key programs are in parallel carried out in South East Asia and Latin America.

EUIPO is a transparent agency meaning that through its website the users have access to a plethora of information related to intellectual property. EUIPO is controlled by a Management Board in which the Member States, the European Commission and the European Parliament have seats and voting rights.