The Damage of Counterfeiting and Piracy

In the previous section the positive influence of IP rights has been indicated and namely the possibility to increase the margin of benefit for the company and its ancillary positive consequences for the economic actors and the economy in general. Such situation creates in parallel attractiveness for the illegal economy. The producers and distributors of counterfeit or pirated goods do not have to invest in the creation of designs, in inventing a new process, in creating a new movie; it is more, they do not even pay taxes due to their participation in the black market economy. Thus, counterfeit and pirated goods can be measured in terms of damage they inflict in the economy. On that assumption the Observatory has established other studies making the damage to the legal economy transparent.

The key results of the corresponding studies, based on statistical data, is that some 2.5% of the global trade, equivalent to some € 338 billion. (CNY 2.6 trillion.) per year, is estimated to be related to counterfeited goods. The corresponding figures of EU imports are even higher, being the numbers 5% of imported goods with an equivalent of some € 85 billion. (CNY 667 billion) per year.

The corresponding study went on to look on the kinds of goods counterfeiters are attracted to. Whereas nearly everything can be and is found as counterfeit the study looked at seizures at the EU borders to make a quantification of the type of The following table gives an overview on the percentages of lost sales with regard to different goods: 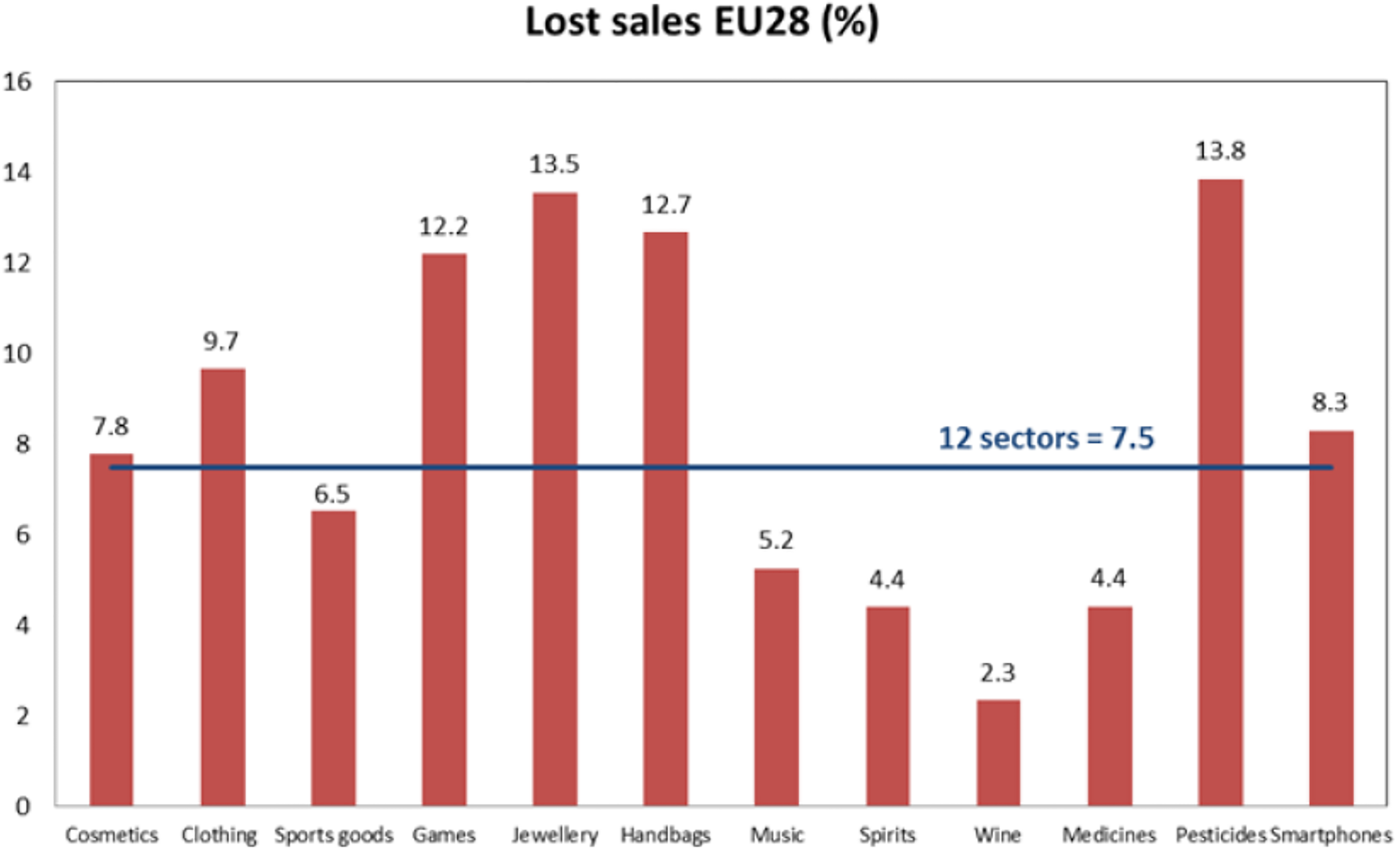 The above numbers are estimated percentages the major 12 sectors of the economy are losing in terms of turnover due to counterfeited goods. The loss ranks as high as 13.8% and 13.5 % for pesticides and jewellery, respectively, with an average of 7.5% across sectors. The direct effect is that € 53.6 billion. (CNY 421 billion) of fake products have not been processed through the regular economy. Although a direct link with job losses cannot be made, just for comparison the number of non-created jobs for the regular economy would be as high as 496,000. Taking into account indirect effects, supply chain, taxes etc. the corresponding numbers are as high as € 90.3 billion. (CNY 709 billion) and 798,000, respectively.

A further important aspect is the cost the regular businesses to have to deal with counterfeit goods on the market. Companies have to enforce their rights in order to defend their assets. The study looked at enforcement costs. The elements of enforcement costs comprise the cost of employees to deal with enforcement, lawyer and court fees, storage and destruction and other cost elements. The total cost/ year of enforcement for all types of companies is € 115,000 (CNY 902,000) per year. Whereas for large companies the amount may be assumable, small companies are often not able to pay the cost for enforcement which is as high as € 83.000 per year on average for them. This explains why often small companies do simply not enforce their IPRs.

Finally, the damage of the illegal and counterfeit economy can be not only quantified money wise in terms of impact on the economy. It has been previously said that virtually all types of good can be counterfeited. In the past, counterfeit products such as pharmaceuticals, yoghurt, air bags or brakes for cars, edible oils have been seized at the borders, all of them of low quality and bearing an inherent risk for the health of the consumers. Therefore on top of the economic loss for the economy counterfeit goods often may present also significant health risks for the consumers.