Guenther Marten, Minister-Counsellor at the EU Delegation in Beijing

The European Union Intellectual Property Office (EUIPO) hosts the Observatory since 2012 fully funding it. Among others, the latter produced a series of studies, either on its own or together with other entities, enhancing the awareness and knowledge around IP and identifying the necessary information for policy makers in support of a favourable business environment.

Although the studies’ results1 which are presented hereafter are based on facts and figures concerning the European Union (EU) only it can be expected that big part of the conclusions can be extrapolated to other comparable economies or can at least give clues on how developed economies are functioning. In that sense the conclusions presented here also are of interest to Chinese stakeholders in order to understand better the role and the importance of IP in a mature economy, a stage China is about to reach.

1.The main studies of the Observatory referred to in this article are 2017 Situation Report on counterfeiting and Piracy in the European Union, Intellectual Property Rights Intensive Industries and Economic Performance in the European Union, Trade in Counterfeit and Pirated Goods. All studies are published online and accessible through the website https://euipo.europa.eu/ohimportal/en/web/observatory/observatory-publications.

The Value of the Intellectual Property Rights

Until very recently it was generally felt that IPRs are important for the consumers to make their decision to buy but no scientifically based evidence existed with regard to the value of IP for the economy in general and the businesses in particular.

The question was therefore, for an economy to do well how important is a favourable environment of protection and enforcement of IPRs and what is or can be its impact on employment, Gross Domestic Product (GDP), salaries and trade?

A sound methodology requires to first determinate which are the IPR-intensive industries in order to establish the universe which can be exploited afterwards. Using rough data from different statistical sources the number of trade marks, designs, patents and plant variety rights per employee was calculated for each industry, and the industries which were above average according to this measure were considered to be IPR-intensive. The result was the identification of 324 IPR-intensive industries in the EU. The importance of the different IPRs is shown in the graphic below: 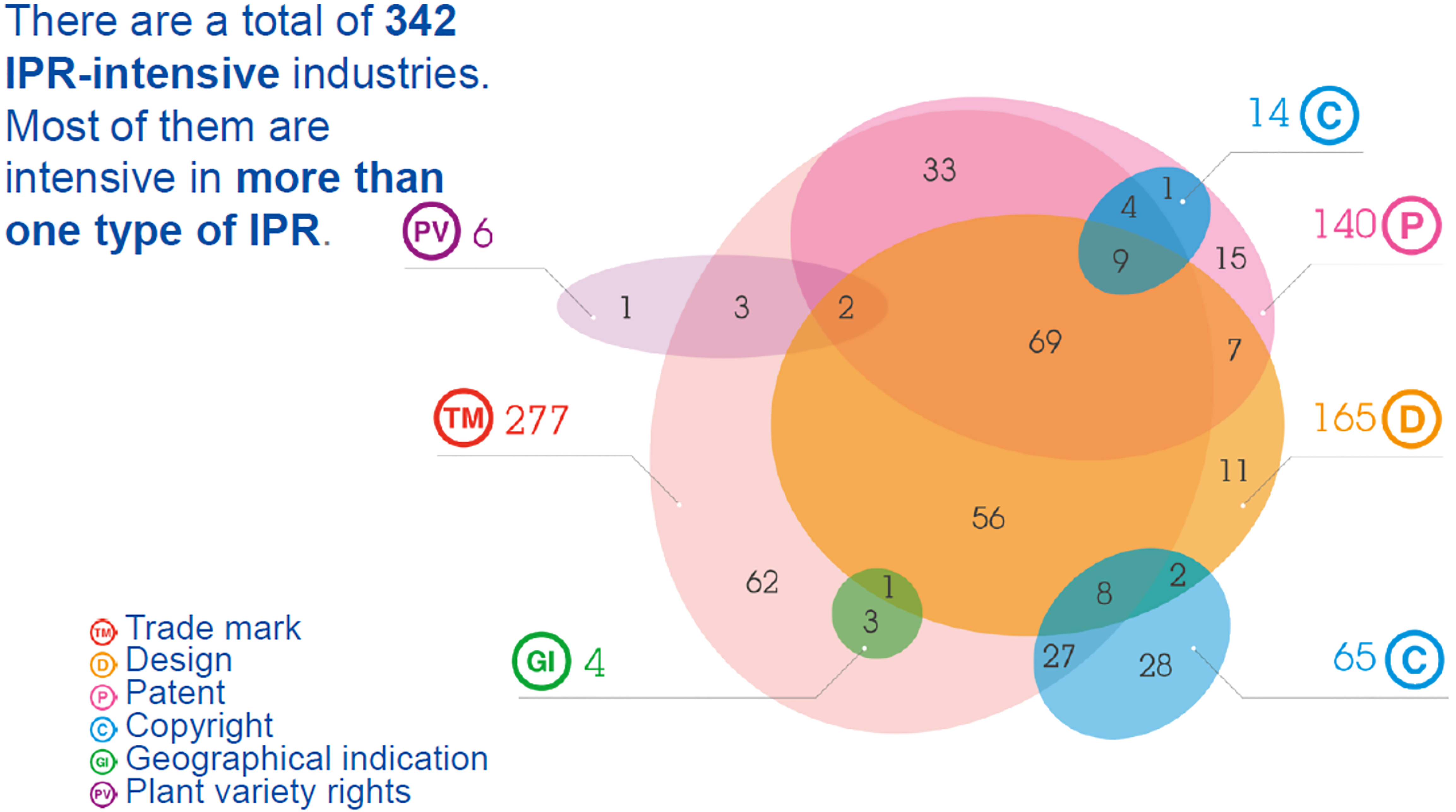 The graphic shows that IPR-intensive industries rely heavily on trademarks, designs and patents in this order. Copyright is less frequently relied on and the remaining IPRs are used only by some specific industry sectors. Most of the industries use more than one IPR to protect their business.

On a macro level the influence of IP in the European economy is therefore of utmost importance constituting the backbone of the industry. The same positive results are also felt on the micro level, i.e.

meaning that IPR intensive industries pay to their employees significantly higher salaries than other industries, with a wage premium of over 46%. Details are given in the following graphic: 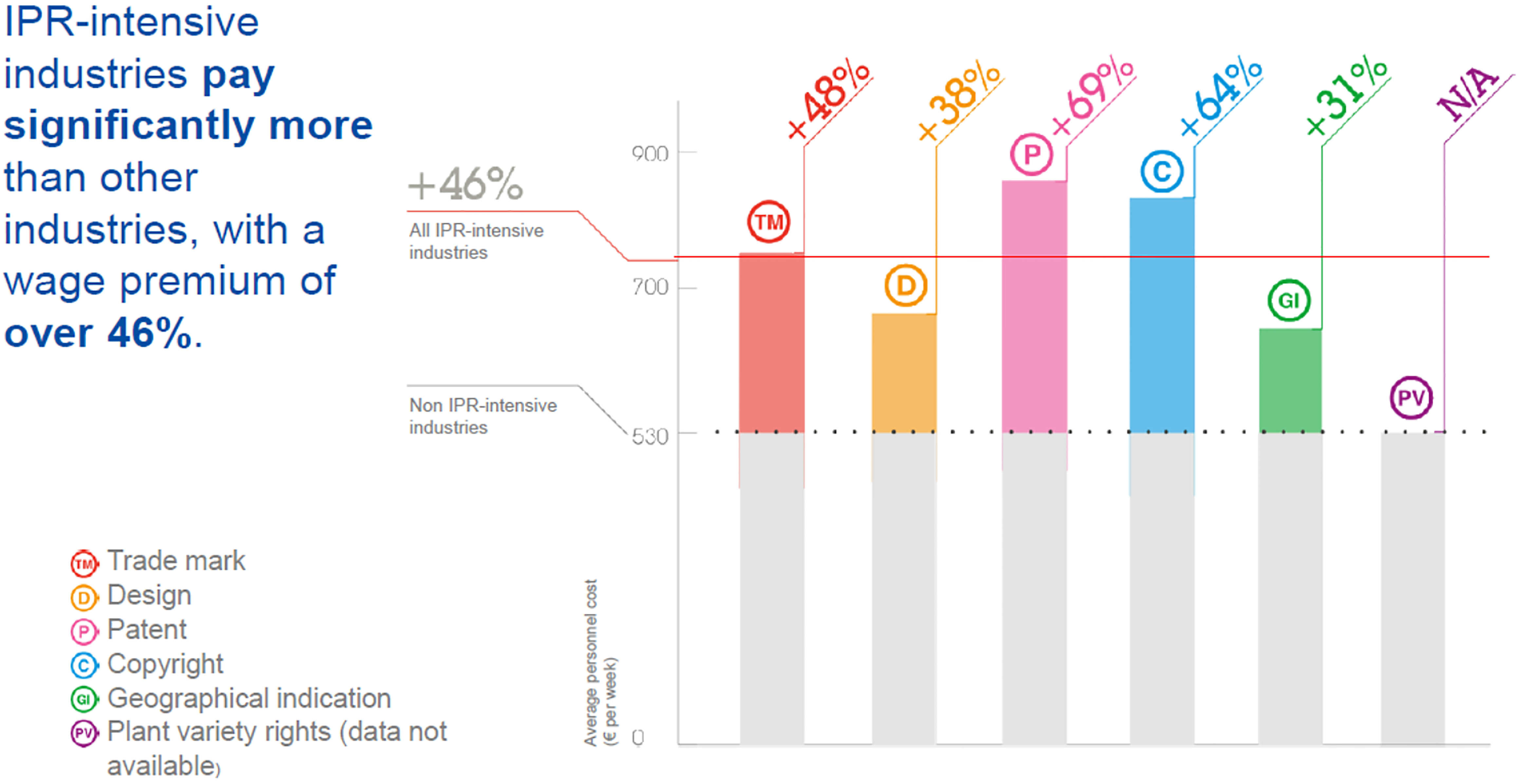 Not astonishingly the industry sectors linked to patents and copyrights exceed significantly this average of 46%, as either the added value is high or the easy way of multiplication can guarantee a higher yield income for the industry.

The EU, for example, had overall a trade deficit with third countries of € 42 billion. However, focusing only on IPR-intensive industries the EU could look to a trade surplus of € 96 billion making the position of the EU stronger than it would be with a less important part of IPR-intensive industries. Are the numbers of trade marks or patents an indicator to rely on to better perform on the markets, meaning that the more patents a country or region has filed, the better it is positioned in the competitive global landscape? The absolute number seems to be of relative importance only. A high number of trade mark filings does not indicate necessarily that these trade marks are also used on the marketplace. A high number of patents does not necessarily mean that each patent brings an innovation, namely if the patent examiner has not sufficient time to examine each patent consciously.

So, in order to assess the innovation capacity of a country the mere absolute number is not sufficiently telling. Germany, for example, is by far among the EU Member States the country with most patent filings.

If however the absolute numbers are put in relation to the habitants, the most innovative country with most patents per habitant would be Luxemburg with 1.82 patents per 1,000 habitants (Germany with only 0.68 patents/1,000 habitants). The corresponding result for China in 2016 would be some 0.97 (1.379 billion. habitants (2016) and 1.338 million. invention patents).

The conclusion of the different studies is very clear. The more the economy of a country relies on IP, the more the economy is competitive on the internal and on global markets and the more will such situation create wealth for the companies and individuals.

Moreover, tangible assets, buildings, stock of goods, etc. constituted traditionally the main part of the company’s value. In recent years, the situation has significantly changed. Increasingly, and largely as a result of the information technology revolution and the growth of the service economy, companies are realizing that intangible assets which includes IPRs are often becoming more valuable than their physical assets.