EUTM System – The Procedure from Application to Registration

EUTM System – The Procedure from Application to Registration

Minister-Counsellor at the EU Delegation in Beijing

The present is part of a series of articles with the aim to give the practitioners in China a rough idea of the functioning of the European Intellectual Property Right (IPR) system with a focus on trademarks and designs. The present article will give an overlook what the practitioners can expect, when filing a trademark application with the European Union Intellectual Property Office (EUIPO). The content of this article will allow the practitioner to understand the whole process and inform its clients accordingly. If not already done, the reader may consider reading beforehand Series 2 of this article chain or, for a detailed insight, consulting the examination guidelines published on the website of EUIPO.

After having dealt in previous articles with strategic considerations, we move to observe what the filing of a European Union Trade Mark (EUTM) application, either directly to EUIPO or through an International Registration (Madrid System) at World Intellectual Property Office (WIPO), implies. The main difference with regard to the Chinese procedure is that no ex officio relative grounds examination takes place.

The EUTM system is based on the view that it is the responsibility and discretion of earlier right’s holders to monitor the publication of potentially conflicting trademarks and introduce eventually an opposition or cancellation proceeding on its own motion.

The following graphic gives an overall view of the application proceedings, including potential oppositions: 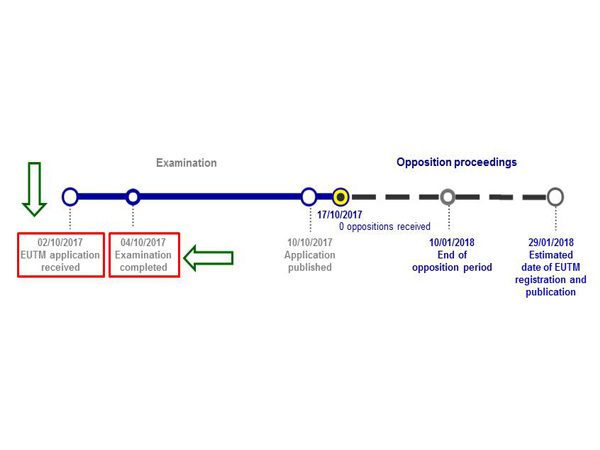 Although the filing date is - in legal terms - the important one the applicant is often very much interested in knowing the approximate date on which his new right may be registered. Different to the Chinese system the EUTM system has a “fast track” and a “standard track” procedure. The simulated timeline in the graphic above reflects the fast track procedure where the trademark can be expected to be registered after 4 months. For the standard track procedure the users have to count with a total of some 6 months, always on the condition that no objections were raised by the examiner on absolute grounds and that no opposition has been filed. In case of opposition some 12 to 18 months have to be added to end the basic proceedings.

More than 99% of the applications received by EUIPO are e-filings. Thus, they cannot only be filed from China but they also can be filed by the future IPR holder itself. In fact, the users are guided through the application process, the whole process being not much different from a flight reservation through internet. It can be easily complied within 10 minutes. Provided the payment is also done the filing process ends. In case of doubt the filing can also be saved half way and taken up at a later stage. In case of representatives no formal attorney power is anymore needed. A use requirement at this stage does not exist. The good or bad faith of the applicant is also not an issue the examiner would care about during the examination procedure.

The EUTM Regulation did not limit the admissible types of trademarks. It enumerates merely the most common ones, i.e. personal names, designs, letters, numerals, colours, the shape or the packaging of goods, or sounds. Such signs must be able to distinguish the goods or services of one undertaking from those of other undertakings and be able of being represented on the register. In this way a multimedia file or a hologram could function as a trademark.

Some words are on the cost of a EUTM application, according to the current system applicable as from March 2016 an e-filing application with coverage of goods or services in one class will cost EUR 850 (6,570 Yuan). By applying for goods or services in a second class an additional fee of EUR 50 (387 Yuan) is due. As from the third or more classes an extra fee of EUR 150 (1,160 Yuan) for each additional class has to be paid.

A further particularity of the EUTM system is the possibility for the applicant to ask for the establishment of a Search Report. A Search Report contains similar, earlier trademarks which serve the applicant to assess the risks of potential oppositions or invalidation proceedings against the application or future registration, respectively. Search reports can be requested for earlier trademarks on the EUIPO register and/or on the participating national or regional register. Each Search Report is subject to additional fees.

It was mentioned above that a difference between “fast track” and “standard track” exists being the procedure for the former quicker. Only simple applications qualify for the fast track procedure for obvious reasons. Therefore only standard trademarks, words or figurative marks, without seniority or priority claim, can be accepted under this procedure. A problematic issue during the examination procedure proved often to be the clarity and precision of the wording or the classification of the goods and services. These hurdles have been overcome with the pre-classification and pre-acceptance of some 70,000 terms (contained in the so-called Harmonized Database). These are terms which are already considered to comply with the required clarity and precision standards. It is in fact an advantage to use these terms as they are most likely also acceptable in other than only the European registration systems. Another condition for the fast track procedure is an upfront payment. All conditions facilitate the work for the examiner with which the examination can proceed quicker. In order to qualify for fast track procedure the applicant must have a domicile either in one of the Member States in the EU or in the European Economic Area (Norway, Island and Liechtenstein) or, if not, nominate a representative in one of these geographical areas.

If there are objections raised by the examiner (for example the sign is not distinctive in whole or in part of the EU territory), these are communicated to the applicant. In case of a Chinese applicant or any applicant outside the EU the examiner will grant it a 2 month’s period for observations to respond to the objections. The decision of the examiner cannot be based on objections which have not been raised during the examination procedure and be given the applicant the possibility to comment on them.

If no objection is raised, the application is published in the EUTM Bulletin. Holders of earlier rights may oppose the application by filing a notice of opposition with EUIPO not later than 3 months (non-extendable) after the date of publication (the opposition proceedings are also subject to an own article of the series).

Once the filing is completed the applicant receives from EUIPO a “filing date”, which corresponds to the date EUIPO has received the complete application. EUTM system has adopted the generally accepted principle that earlier rights prevail over later rights (first to file principle as in China). In order to determine the earlier date of two different rights the filing date is the one which counts, provided that the earlier trademark, if not registered yet, proceeds afterwards to registration. It is justified to admit an application as an earlier trademark due to the fact that the length of the proceedings before the EUIPO is beyond the discretion of the applicant and cannot be considered to its disadvantage.

Once the application has been fully submitted, the applicant it is not able to change its content beyond obvious linguistic errors, errors of transcription or manifest oversights. In fact the filing date, as already pointed out, has a legal value for the applicant to act upon. A change in the, for example, goods and services would change the scope of protection of the trademark and affect its legal value. Thus, nothing else than obvious linguistic or otherwise manifest errors can be corrected without affecting the filing date. The applicant is however allowed to withdraw its application at any time and present a new application or restrict the application, deleting for example some goods from the list.

Coming back to the graphic at the beginning of the article, once the application is admissible, paid for, examined and not subject to objections on absolute grounds by the examiner, it proceeds to the publication in the Official Journal of EUIPO (in electronic format only). It is a daily publication and free of charge accessible on the EUIPO website. If the users are already IPR holder of one or more EUTM a regular check of the website is advisable in order to assure that not confusingly similar trademarks, with a later filing date will proceed to registration. From the date of publication holders of earlier rights have three months to present an opposition against a published trademark application. This is an absolute time limit, meaning that it cannot be extended. Once the 3 months have passed an opposition is not anymore admissible. The holder of the earlier right has however the possibility to invoke the same opposition grounds (and some more) in invalidation proceedings at a later stage. If no opposition is received the application proceeds to registration. The applicant would then be notified by the Office that its registration certificate can be downloaded.

The grounds of opposition are relative grounds of refusal, based on an identical or similar (and earlier) sign for identical or similar goods and services making that the relevant consumer are most likely to be confused about the origin of the goods and services when they are confronted with the signs at different moments in time (more on that in a separate article of the series).

As with the filing of a trademark application the opposition can be filed electronically with EUIPO. Also the consecutive communication between the EUIPO and the parties are done through electronic means. The proceedings are strictly contradictory, meaning that each brief which has been received from one party by EUIPO is sent to the other, either for comment or for information purposes. The Opposition Division is bound by the scope of opposition as defined by the opponent.

Once the parties were able to comment on the other’s arguments with normally 2 rounds of briefs the written procedure is closed and no more briefs other than containing mere legal arguments are admissible. It is then up to the Opposition Division, composed of three examiners, to render the decision upholding or rejecting the opposition, entirely or in part.

The Decision of the Opposition Division not only rules on the substance. It also decides on the costs. The general rule is that if the opposition is fully successful the costs have to be borne by the applicant and vice versa. If the opposition is in part successful it is generally decided that each party bears its own costs, meaning that no party has a claim against the other party.

The costs comprise the opposition fee of EUR 320 (2,475 Yuan) and a lump sum for the professional representative for each party, if they were represented by a legal professional. The representation fee is limited to EUR 300 (2,320 Yuan). So, if the opposition is fully successful, the cost fixed by the Opposition Division to be paid by the applicant to the opponent would be typically EUR 620 (4,390 Yuan).

The reader until this point should by now have a general knowledge on the principles what to expect when filing a EUTM. Being the present only a general overview the reading of the series of articles cannot, for the purpose of handling a concrete case, substitute the necessary due diligence by referring to the legal texts and practice notes.

1 Günther Marten is Minister-Counsellor for IP rights at the EU Delegation in Beijing since October 2016. He has more than 25 years of IP experience and often speaker on IP Conferences in China. He has published multiple articles on IP related matters.