Practice: for Chinese innovative subjects, at what situation they are suggested to use UP system or not to use, and the specific reasons are? 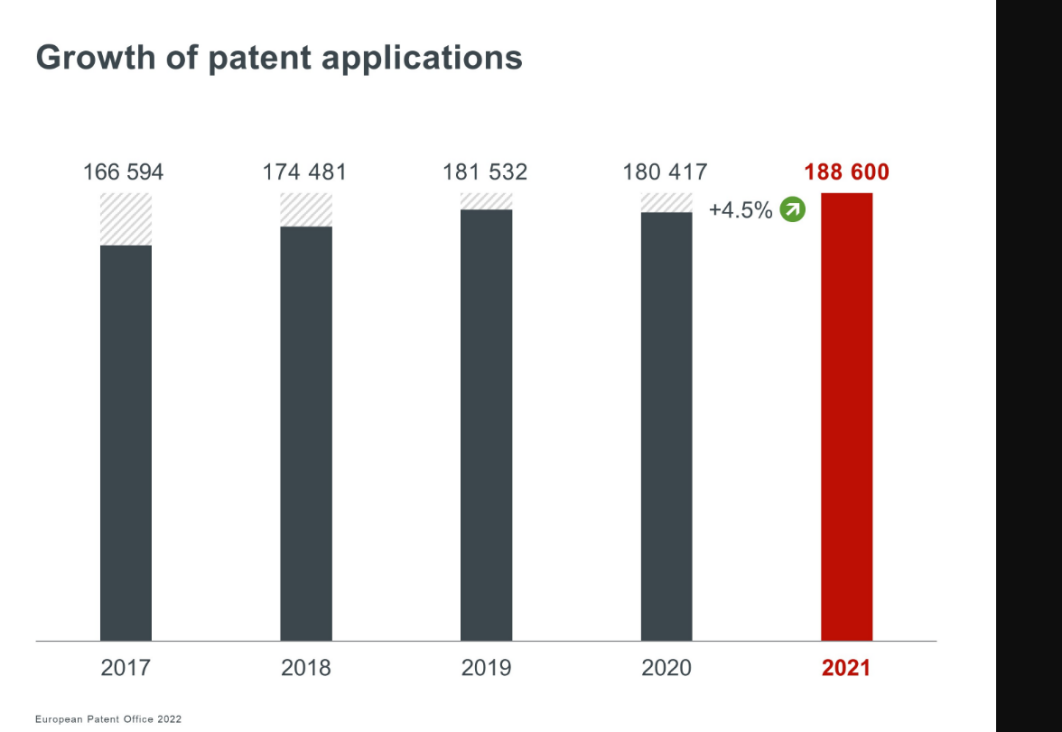 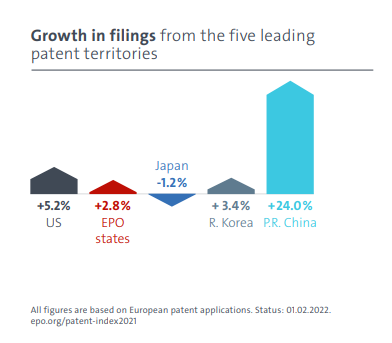 These numbers show that Chinese applicants in recent years actively seek to protect their inventions on the European market. As active users of the European patent system, Chinese companies, universities, and natural persons should now be in the final stages of preparation for the changes and ensure that all necessary steps are taken by the start of the new system. This article covers the essentials of what Chinese applicants need to know.

Currently if an applicant wishes to protect an innovation across Europe, in that case, it is required to file a patent application at the European Patent Office (EPO) and process that application through such procedures as formal examination, search, publication, substantive examination, and finally applicant receives the grant. After grant publication applicant has three months to validate the European patent to countries in which the patent owner is interested. This process may be expensive, especially if protection is needed in many countries. Successfully validated European patent then operates as separately national patents.  These national patents are then subject to the patent legislation of the country in which they are granted, and they are litigated in national courts in each country separately.

Once the Unitary Patent package enters into effect, after the grant, an applicant will have three options *:

a.Filing a Unitary Patent request within one month after of grant;

b.Traditional EP validations within three months after of grant, which are filed under the present system;

c.The patent owner can also combine both schemes: to file Unitary Patent requests and file EP validation applications to those countries which do not participate in the Unitary Patent system. 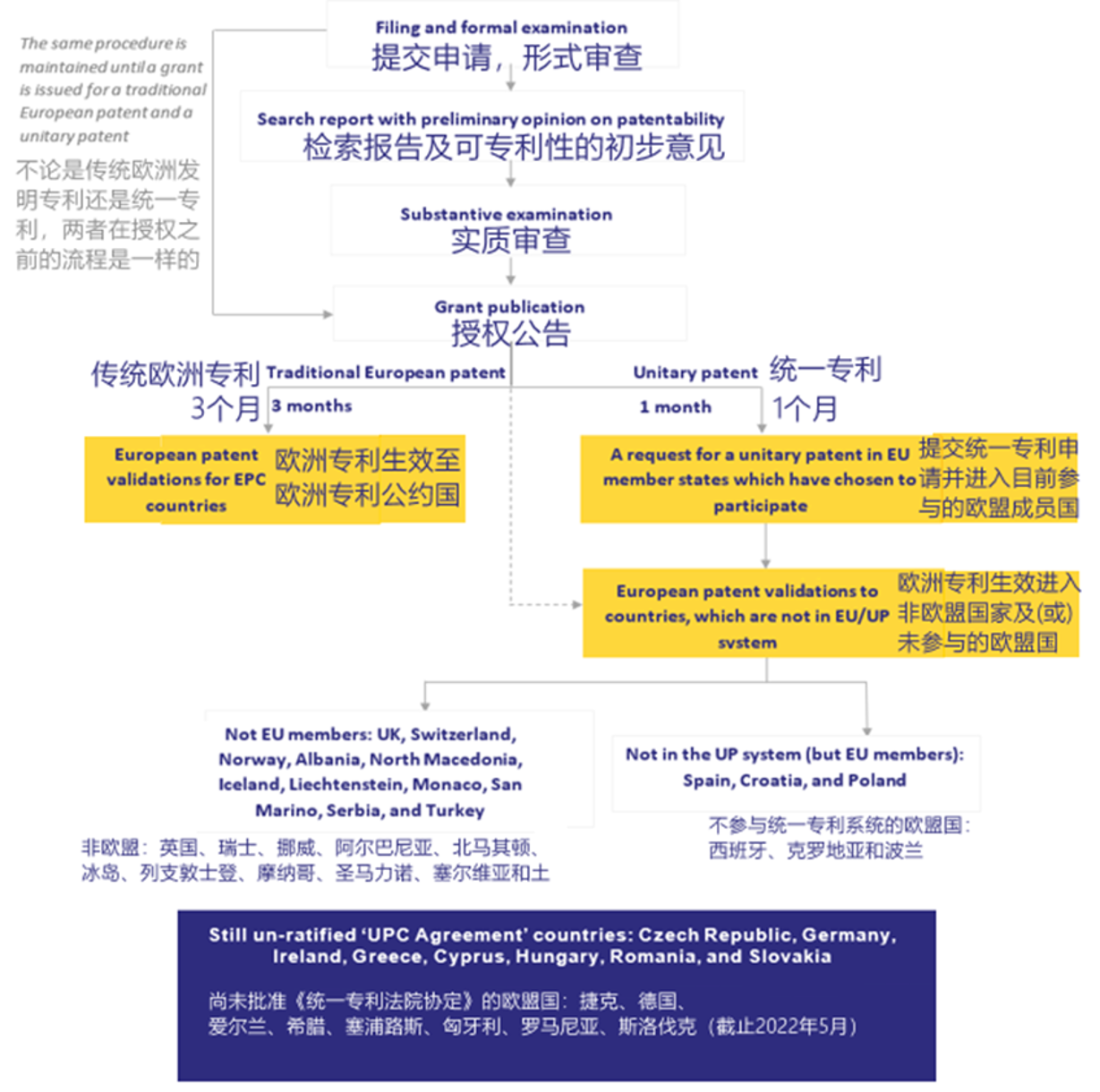 The significant advantage of a Unitary Patent is the potential savings of validation and renewal costs. Then, instead of validating their European patent in several states, which can be quite an expensive, time-consuming, and complex administrative process, patent proprietors will be able to obtain a Unitary Patent by filing a single request with the EPO. There will be no official fee for filing a request for unitary effect. This will reduce associated administrative costs. The Unitary Patent will take force immediately in all member states, and there will be no translation costs or requirements after the transition period has expired. There may be lower translation costs and requirements during the transition period. The applicant will have to pay the renewal fee for Unitary Patents to the EPO and not to each validated country. It will consist of only one fee, procedure, currency, and deadline. The Unitary Patent renewal fee will be the same as the official fees of four member states: Germany, France, Great Britain, and the Netherlands.

Which option to choose: validations or Unitary Patents?

Furthermore, many Chinese patentees choose to get patent protection in only four or five countries. Thus, patentees who choose coverage in Great Britain, France, Germany, and Spain should also file traditional validations, as Spain and Great Britain do not participate in a Unitary Patent system, and traditional validations to these countries will still be needed. A Unitary Patent would only be cheaper than validations if the patentee is interested in validation in at least two- four additional countries (besides France, Germany already covered by the Unitary Patent + Great Britain), for example in Italy, Netherlands, Estonia, Latvia).  Nevertheless, if the EU is an important market for the applicant, starting to apply for Unitary Patents on some of the applicant’s inventions could be reasonable. It is calculated that compared to validating a European patent in all 17 member states of the new system, the Unitary Patent offers a significant cost reduction over its lifetime (approx. -60%)

Early uptake of the Unitary Patent

To those applicants interested in Unitary Patents and decided to file Unitary Patent requests for their already filed European patent applications, which are not granted yet, it is worth thinking more about new EPO measures. Two new transitional measures will be applicable to European patent applications, having reached the final phase of the grant procedure. These measures have not come into effect yet, but they will be available within temporary period, within 3 months, from the date of deposit of Germany’s instrument of ratification of the UPC Agreement. Therefore, according to UPC preparatory committee’s roadmap, it should be from the end of December. The first transitional measure - early request for the unitary effect - will allow applicants to file early requests for unitary effect already before the start of the Unitary Patent system. If the requirements for the registration of a Unitary Patent are met with the early filed request, the EPO will register unitary effect once the system starts. The second measure- request for a delay in issuing the grant decision -will allow applicants to delay the formal grant until UPC becomes operational so that Unitary Patent protection can be requested. If the decision to grant a European patent is issued before the into force of the UPC Agreement, no Unitary Patent request can be registered. Filing an early request for a Unitary Patent will not automatically cause EPO to delay the grant of the application. So, it will be essential to file an explicit request for the delay of the grant. These two new EPO procedures cannot be requested yet, so if the Unitary Patent is essential for the applicant, some other options for delay are available now. Like using further processing procedures, also request an amendment to the application in response to the notice of allowance, etc.

Under the new system, all Unitary Patents, European patent applications, and traditionally validated European patents, SPCs that are not opted out, will become subject to the Unified Patent Court (UPC) jurisdiction. As for granted and validated patents and pending applications, during a transitional period of 7 years (can be extended 7 years more), applicants can decide to opt-out from the new system by filing an opt-out request. So that national courts will remain the sole jurisdiction for these patents instead of the jurisdiction of the Unified Patent Court. Unitary Patent automatically will fall under the jurisdiction of the UPC, and no opt-out will be possible. However, there will be three main options available for traditional European patents: a) To opt-out of all applicant’s European patents; b) do not do anything; i.e., do not opt-out any European patents c) mixed way: opting out of selected cases only.

There is no single solution, and several factors should be considered in deciding whether to opt-out of the UPC for traditionally validated European Patents. However, the most crucial reason to opt-out would be to avoid a UPC revocation action. One action brought before the UPC’s Central Division could revoke the patent in all Member States. As comparing, if the same patent is sued in national courts, there are separate proceedings in each national country’s court and different decisions could be issued.  In some countries, a patent may be revoked, but in other countries may leave valid or not sued at all.  Another reason patent owners would consider opt-out possibility is the unpredictability of the new UPC system. No one knows how the UPC will function in practice. Judges of UPC will be new, and there will be a lack of case law and uncertainty in forecasting costs, time, and litigation outcomes.

On the other hand, if the patent owner initiates litigation, staying within the UPC's jurisdiction may be advantageous. However, opting out of the patent is not a permanent decision. Patent proprietors can opt back into the UPC if they change their minds. A European patent that has been opted out could "opt-in" to the UPC later by withdrawing the original opt-out, as long as proceedings relating to the European Patent have not been started in any national court. Thus, one of the tactics could be to file opting-out requests for all patents (or at the very least for those of relatively high value) at least in the initial few years of the system coming into effect. If the patent owner wishes to enforce an EP in the UPC- opt-in immediately before filing an action in UPC.  If a patent proprietor is considering choosing a mixed way, it may be helpful to think about these facts:

a) the patents which were opposed before EPO and remained in force are strong, and it is a lower risk of central revocation in the UPC;

b) pharmaceutical and biotech inventions are more prominent targets and are attacked more often; therefore opt-out of these patents would be recommended.

c) if the firm owns only several patents, each patent may be very valuable, and opt-outs would also be advisable.

Patent owners who have not decided whether to opt-out of their patents yet, should do it now to be ready to file opt-out requests during the safe “sunrise period”, which will probably start from 1 January 2023 and will last until 1 April 2023. If an opt-out is not filed during the “sunrise period” and action has been filed for relevant European patent before the UPC, when it enters into forcefully, it is not possible to then opt-out.

What are other strategic options if you want to avoid the UPC?

One more possible option is double patent protection. UPC Agreement does not indicate the issue of  “double patent protection”by a Unitary Patent and national patent for the same invention. It is a matter of national law to reject or allow such protection. Germany has amended its double patenting regulations. This will change with the entry into force of the UPCA: a German national patent and an identical Unitary Patent or an identical European validated patent can be effectively granted as long as, in the case of a validated patent, no opt-out has been declared. Once opt-out is filed, the previous rules will continue to apply, prohibiting double protection for the German national and European patent.

France will also allow double protection for national patents and not –opted out European patents and Unitary Patents.

The Unitary Patent package will create an alternative for separately validated and maintained European patents and a unified court system within the UPC Member countries. Whether the clients should use this system depends on the client's strategy, each case is different and individual decisions will be needed. Our European patent attorneys and lawyers experienced in prosecution and litigation are ready to help regarding EP validation strategy evaluation, Unitary Patent requests, opt-outs, and other UP/UPC services.

More information about UP/UPC system you can find in METIDA website.