China’s market watchdog said on February 14 that it had issued an administrative fine order against the Munich Reinsurance Company (MRC) for its unreported acquisiton of Covanta Europe Assets Ltd. (CEAL), according to a notice published on its official website. 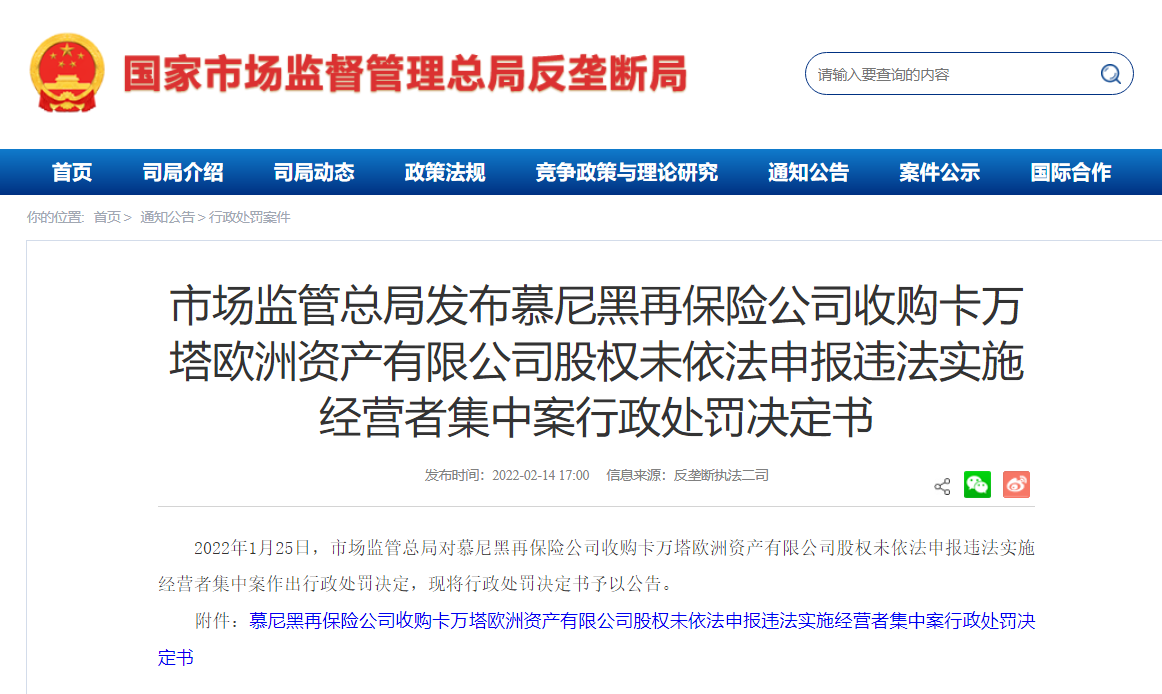 The State Market Regulation Administration (SMRA) in January fined the German reinsurer 300,000 yuan ($47,000) for not notifying the government agency for review of the acquisition deal identified as potentially monopolistic and anti-competitive under China’s Anti-Monopoly Law (AML).

Covanta Europe Assets Ltd. is a thermal plant that treats municipal and industrial waste that can’t be reused or recycled. It is a joint venture between Green Investment Group Investments Ltd. (GIG) with 10% stake, DIF Infra 5 UK Ltd. (DIF) with 40% stake, and Covanta Holding Corporation with 50% stake.

The MRC is a German multinational insurance company based in Munich, Germany. It is one of the world's leading reinsurers, with its shares being listed on all German stock exchanges.

By yearly revenue generated both woldwide and in China alone, the MRC and the GIG reached the threshholds for prior notification under Article 3 of the Provisions of the State Council on Thresholds for Prior Notification of Concentrations of Undertakings (《国务院关于经营者集中申报标准的规定》) in 2018.

The MRC acquired the DIF’s 15% stake of the CEAL and shared its control over the CEAL in July 26, 2019. The deal was concluded on December 4, 2019 without being reported to the SMRA for review.

The SMRA’s probe also found that the deal would not preclude or restrict competition in the relevant market.

The full text of the administrative order is available here.