On December 10, 2021, the United States Patent & Trademark Office (USPTO) issued a final order for sanctions against a Shenzhen-based intellectual property agency. This follows a show cause order issued on June 8, 2021 and a response filed on July 6, 2021. The respondents have been involved in filing submissions in more than 15,000 trademark matters before the USPTO. Respondents have engaged in the unauthorized practice of law, provided false domicile information for applicants, impermissibly entered the signature of the named signatory on declarations and verifications, and violated other USPTO Rules and the USPTO’s website terms of use. Sanctions include terminating over 15,000 proceedings involving submissions filed by the Respondents and precluding Respondents from further correspondence or submissions. 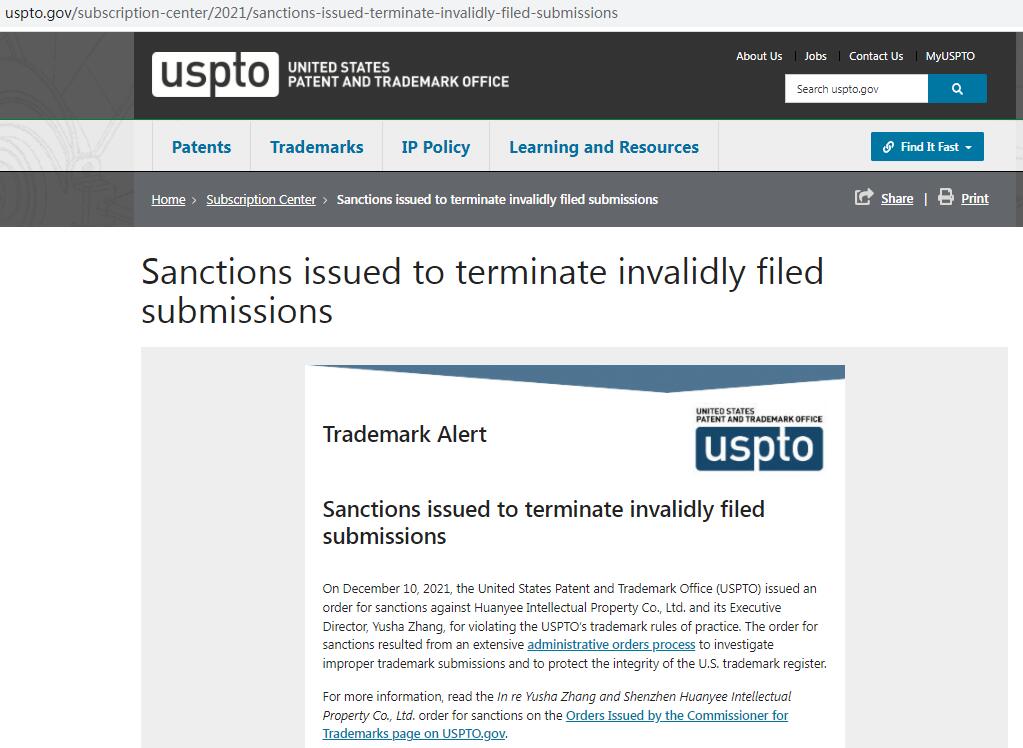 The China-based organization that advertises that it assists clients with registering trademarks in China, has filed more than 30,000 foreign trademark applications, including in the United States, and offers U.S. trademark registration services via its website.

Respondents are not authorized to make submissions to the USPTO on behalf of others in trademark matters. The agency doesn’t have any U.S. licensed attorneys on staff who supervise Respondents’ work.

Email addresses associated with Respondents appeared in the correspondence fields of more than 1,700 trademark applications and registrations naming different allegedly unrepresented applicants submitted through the USPTO’s Trademark Electronic Application System (“TEAS”), allegedly filed by the applicants between 2016 and 2019. The submissions primarily identified the mailing address for the agency and an email address within the domain huanyee.com. Further, Respondents registered several uspto.gov accounts and continued to file more than 14,000 more applications and other submissions on behalf of others during the past three years.

In response to the Order to Show Cause,

The Response expresses disagreement “with many of the assertions in the Show Cause Order” (Response at 5) but provides no evidence to rebut them. The Response ultimately concedes that Respondents violated the USPTO Rules and website terms of use but seeks to excuse the violations and avoid sanctions by challenging the administrative sanctions procedure and authority to issue sanctions. The Response also argues that sanctions should not be imposed because Respondents were unfamiliar with the requirements of the USPTO Rules, did not willfully violate them, and are taking actions to correct the issues raised.

As discussed in the Final Order, the USPTO held the arguments to be unpersuasive and fail to establish why any of the sanctions outlined in the Show Cause Order should not be imposed.

Accordingly, the USPTO imposed sanctions including the termination of all all trademark application proceedings involving submissions by Respondents or filed through a uspto.gov account registered to or controlled by any officer, employee or agent of the agency. The USPTO provided a 198-page 2-column list of trademarks covered by the order listing over 15,000 trademark applications.

In explaining the sanctions, the USPTO stated,

the conduct at issue was willful and part of a pattern of activity intended to circumvent the USPTO Rules. The conduct infected thousands of applications, resulted in false and fraudulent submissions being made to the USPTO, and adversely affected the integrity of the federal trademark registration process…

The full text of the final order is available here.