Recent studies conducted worldwide have reached a consensus that “China’s moment” is befalling the global arena of artificial intelligence (AI) research and application. Beyond this bare fact, the country has never hidden its ambitions of prolonging “China’s moment” into “China’s era” with its comprehensive national power, a putative measure of Chinese origin, going from strength to strength.

With such a broader picture in mind, China’s top search engine Baidu, Inc. has already been a leading AI company with a strong Internet foundation. Its global fame was capped with a 4th ranking on the list of top AI companies in 2019 publicized by the Harvard Business Review, a leading business management medium, on January 15, 2020 and the rest of the accoladed included Google, Apple, Microsoft, and Amazon. Baidu has thus been recognized as a flagship ingredient of “China’s moment” on the AI scene.

Baidu released the “Baidu Artificial Intelligence Patent White Paper” on April 26, 2021, amid the 21st World Intellectual Property Day. Despite its commitment to innovation, openness, cooperation and ECO, Baidu have owned AI patents of five digits granted in China. The company’s set a good example of enforcement and application of its vast patent portfolio.

Besides, echoing the “do better” creed prevalent in the discourse of tech giants as well as the Chinese government’s call to develop AI responsibly, Baidu has been seriously devoting to solving social challenges and advancing benefits in China. In this sense, Baidu is being acclaimed to be China’s Leading AI company, both technically and ethnically. 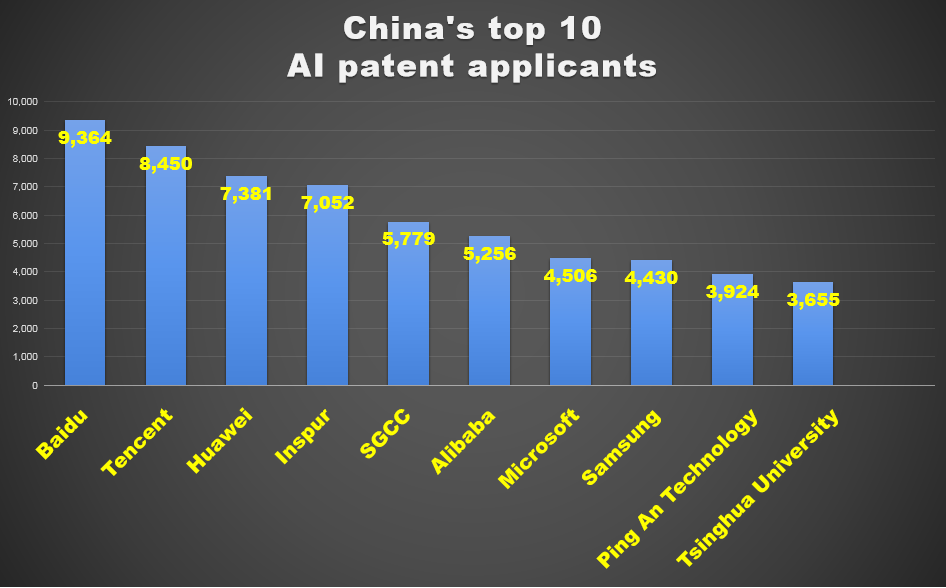 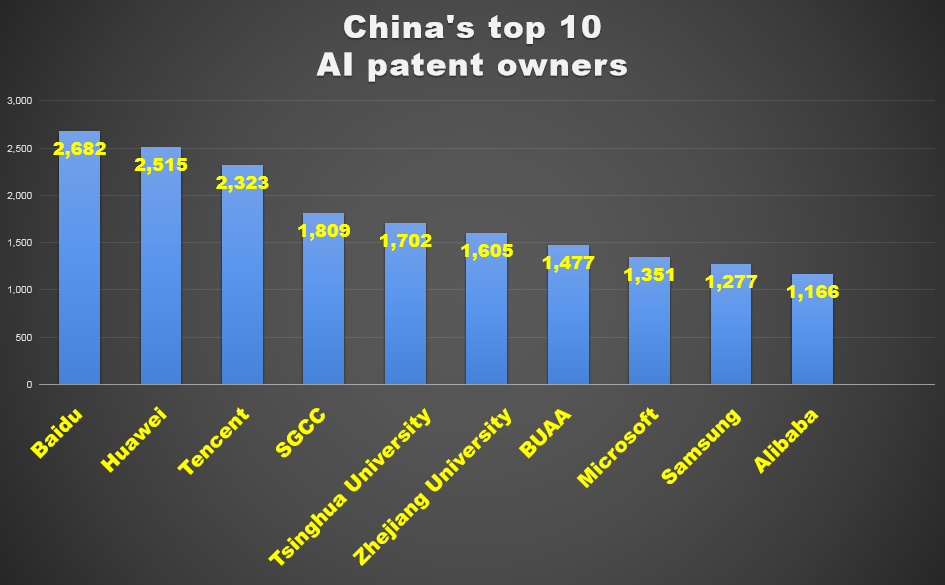 Of all indicators of a tech company’s strength of AI, the numbers of AI-related patents filed for and granted are alleged to be the most crucial. In Baidu’s case, “Technology” and “Innovation” have infallibly been cited to reinforce its claim to fame.  A “Patent Wall”, indicating Baidu’s focus on innovation, marks its employees’ contributions and celebrates its own innovative culture. Baidu also takes the initiative to take responsibility for independent innovation in technology. PaddlePaddle and Baidu Kunlun have endowed China with independent intellectual property rights in the core underlying technology of artificial intelligence, creating a bright future for the company itself. 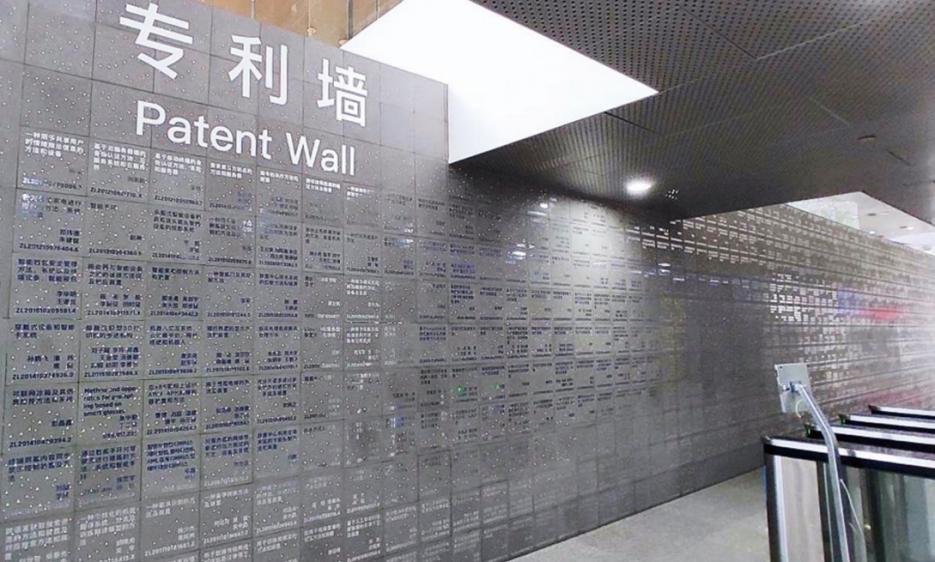 Baidu, Inc. originated from one patent. In July 1999, Robin Li had his patent for “hypertext document retrieval system and method” granted in the US, and half a year later Baidu, as a search engine company founded on this groundbreaking patent, was incorporated by him in Beijing. It’s the first search engine that used hyperlinks to measure the quality of websites it was indexing, predating the very similar algorithm patent filed by Google two years later in 1998. Google founder Larry Page referenced Li's work in some of his U.S. patents for PageRank. Robin Li’s patent “hypertext document retrieval system and method” and its application have blazed the trail for most of the world’s mainstream search engines and still serve as the cornerstone of the corporate behemoth’s over 60 billion USD market capitalization.

After the fashion how its virgin patent paid off hugely, Baidu has been striving for maximum utility in designing AI products by applying its patent portfolio. Three products or product features figure prominently as overachievers of this kind in the “Baidu Artificial Intelligence Patent White Paper”: the Xiaodu Smart Display, the world’s first smart speaker with a touchscreen, the “Intelligent Vehicle Infrastructure Cooperative Systems (IVICS)” approach, and the great compatibility of the deep-learning platform PaddlePaddle with high-performance general-purpose AI chips.

Born not a novice at patents, Baidu has been fortifying its competitive advantages by boosting its arsenal of patents all these years. According to the “Analysis report on the Quality of China's AI Patents 2020" released by China’s State Intellectual Property Operation Platform (SIPOP) and the China Academy of Information and Communications Technology (CAICT), Baidu came out on top in terms of the general quality of its AI patents and the number of its patents for some of the most competitive segments of AI technology. So far, the company has won 10 awards of China Patent Awards, four of which are Silver Medals. And it has the most awards for AI patents under its belt out of this China’s most prestigious patent competition. In May 2021, an AI patent owned by Baidu was nominated for a Gold Medal of the 22nd China Patent Awards and a decisive win is being eagerly anticipated.

Baidu has been weighing quality over quantity when architecting its patent portfolio. Cui Lingling, Intellectual Property director of Baidu, attributes the importance Baidu has been attaching to innovation and the protection of innovation to the company’s inherent culture. The IPR team at Baidu is trained on working knowledge about products and to communicate with engineers and programmers about the inventive steps and application prospects of certain specific technologies and overall technology trends. This has ensured a scientific and smart guiding strategy to be drafted by the team when it designs and structures the company’s patent portfolio. The team has managed to see to it that its work has run through the life circle of each AI product.

From “high up” to “down below”

In 2017, Baidu launched Apollo as the world's first autonomous driving open-source platform. New obstacle perception technology and high-definition maps, among other features, were made available to the auto industry and all third parties involved in the autonomous driving business. In its pursuit of technology, Baidu has been matching its “longing for the stars” with utterly “down-to-earth endeavors”. Social responsibility has been steadily assigned more weight in shaping Baidu’s AI research and development. 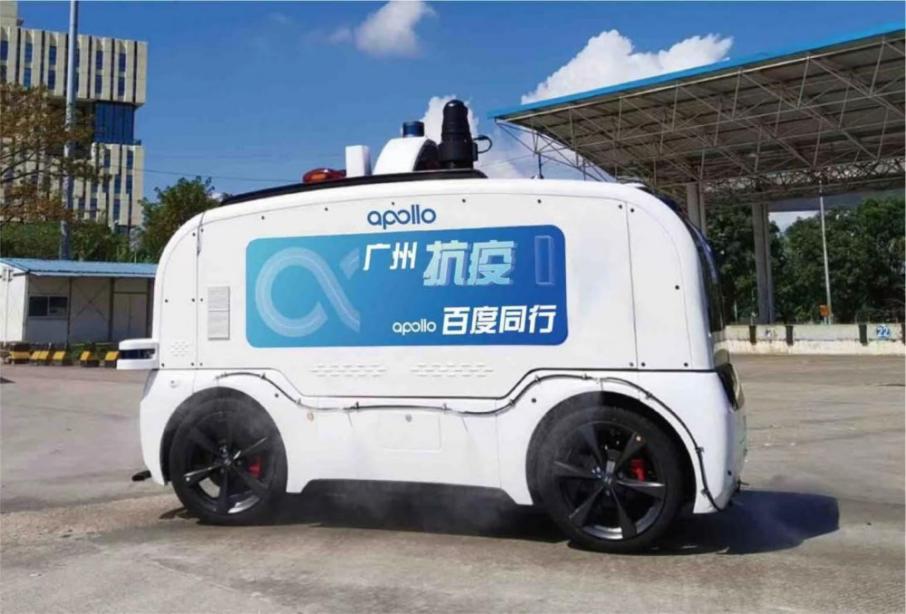 Practical application is a genuine “driver” of the development of the company’s autonomous driving technology. Baidu based its firm belief in the vehicle-infrastructure-integration solution on China’s high urban density environments, greatly diversified grids, and ever-upgrading infrastructure. The “Baidu Artificial Intelligence Patent White Paper” reveals that as of April 2021, 3,000 patents for the Apollo autonomous driving open-source platform were granted, beating any other Chinese companies competing for the autonomous driving market. More importantly, the Apollo project has expanded into a holistic intelligent transport system to be included in China’s New Infrastructure Plan. As the company behind this project, Baidu is reaching into the country’s economic capillaries by providing services in public sectors. Its user base stands a great chance of swelling to be the entire Chinese population.

The “Baidu Artificial Intelligence Patent White Paper” illustrates the social benefits that PaddlePaddle is capable of with the instance of PUYU, a corporate user of PaddlePaddle. This Shenzhen city-based unmanned aerial vehicles (drones) producer developed drones dedicated to forest management inspections and equipped them with mapping software developed on the PaddlePaddle platform. The inspecting and monitoring efficiency has been substantially improved with the use of such drones. PaddlePaddle advances the public interest through empowering the enterprises in its ecosystem.

A topology for drones dedicated to forest management inspections

Today, the impact of AI technology developed by Baidu can be felt in more and more Chinese cities. The “ACE (“A” for autonomous driving, “C” for connected road, “E” for efficient mobility) Transportation Engines” are in service in Changsha, Baoding, and Chongqing to optimize the urban traffic management. In Hanzhong City of Shaanxi Province, of 200,000 families of diverse poverty levels, 2,000 families of the lowest poverty level were efficiently determined in terms of eligibility for financial aids by the poverty alleviation staff with the use of deep learning. In Dashilan Subdistrict of Beijing City, a single senior living independently has begun to enjoy literally post-modern conveniences such as motorized curtains installed with automatic electric tracks, smart plugs and power strips, and a smart lighting system. By interacting with the Xiaodu Smart Speaker, the senior can control curtains, air conditioners, and all home appliances with no need to move about in the house. The company invented the LinearFold algorithm to help shrink the length of time needed for determining the secondary structures of the RNA sequence of the entire genome of SARS-CoV-2, the virus that causes COVID-19, from 55 minutes to 27 seconds. Baidu also invented the AI-powered Multi-person Temperature Screening Solution that was used for instant coronavirus fever detection of large groups of people. In addition, Baidu allocated a fleet of self-driving cars equipped with the Apollo platform for food delivery and the implementation of sterilization and disinfection duties. Nowadays, from China’s perspective, AI is not only an ivory-towerish academic research area, but has also become part of its people’s real daily lives. Baidu has proven to be a significant contributor to this metamorphosis.

From “investing” to “inventing”

Despite a unanimously upbeat vision of how an AI-powered world would be, Baidu, among numerous Chinese enterprises, had to, first of all, survive harsh realities resulting from the power struggle between China and the US.

Under any circumstance, Baidu has been a big spender in research and development. It has reported an over 15% R&D spending to revenue ratio for 10 years running. The figure has unmistakably placed it at the forefront of Chinese tech companies. In 2020, the year hit hard by the COVID-19 pandemic, the company squandered more than 3 billion USD on R&D, driving the R&D of core technologies to revenue ratio to a record high of 21.4%.

The "Baidu Artificial Intelligence Patent White Paper" reiterates Baidu’s commitment to openness and clarifies that the company’s two AI software products Apollo and PaddlePaddle were developed under the Apache License 2.0, one of the most common open-source licenses. Targeting developer users of PaddlePaddle, Baidu has launched an accelerator project about the application, management, and operation of patents for technologies invented on PaddlePaddle. Outstanding original technologies will be identified and their developers will be served throughout the process starting from patent filing down to patent commercialization with Baidu functioning as a co-owner of the patents for these technologies. To soundly inflate its ecosystem, Baidu provides users of its platforms with online and offline instructional courses to prevent patent litigations. In 2020 Baidu joined the Open Invention Network (OIN) community, where freedom of action is enabled for its members and users of Linux/OSS-based technology through its patent non-aggression, cross-license in the Linux System. Baidu is planning more moves about its patent ecosystem. 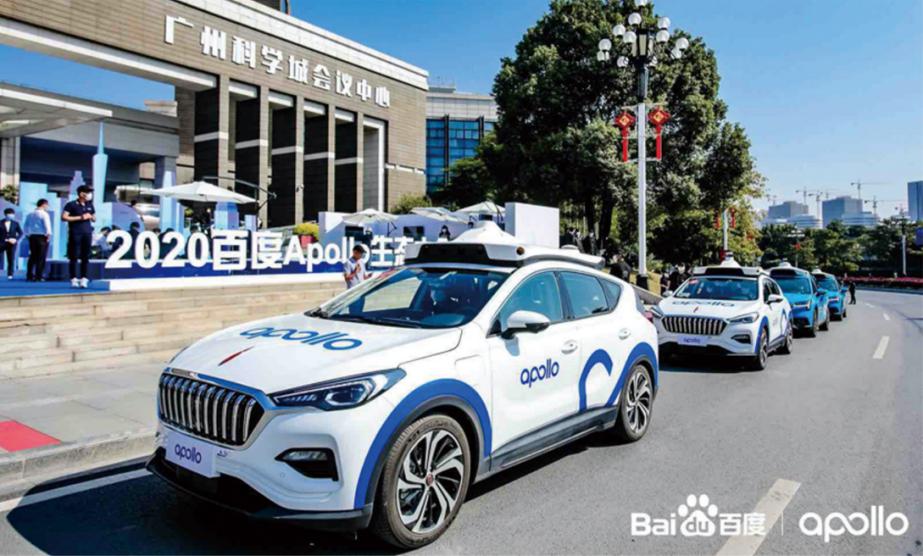 What barriers Baidu aspires to break are not limited to the ones between technologies. It’s reaching out to industries outside the tech business to share sources and empower each other. In 2015, Baidu led the formation of the Industries Alliance of Intelligent Speech Intellectual Property, of which the over 20 constituent top-caliber companies encompassed Haier Group Corporation, JD.com, Inc., and ZTE Corporation. The alliance was meant to promote the application of intelligence speech. In June 2019, Baidu, as the initiator of the alliance, signed an agreement with Haier to cooperate on intellectual property in AI and the Internet of Things (IoT). In April 2020, the International Chamber of Commerce China (ICC China) unveiled the Cooperation Initiative on Intellectual Property in Artificial Intelligence, which was proposed by over 20 Chinese organizations led by Baidu.

An era of knowledge equity is on the horizon. As the internet, the “savage” harbinger of this unprecedented and never-ending decentralization movement going on on a global scale, becomes more and more powerful, the last and most impossible inequity, the inequity in intelligence, is being wiped out or compensated for by artificial intelligence. In this sense, artificial intelligence is far more than a technological means. It’s so fresh, humane, and to the point. It’s a flawless and evil-free social and cultural undertaking. Baidu is happy to find its reincarnation in it, as a company as well as an “organism”.